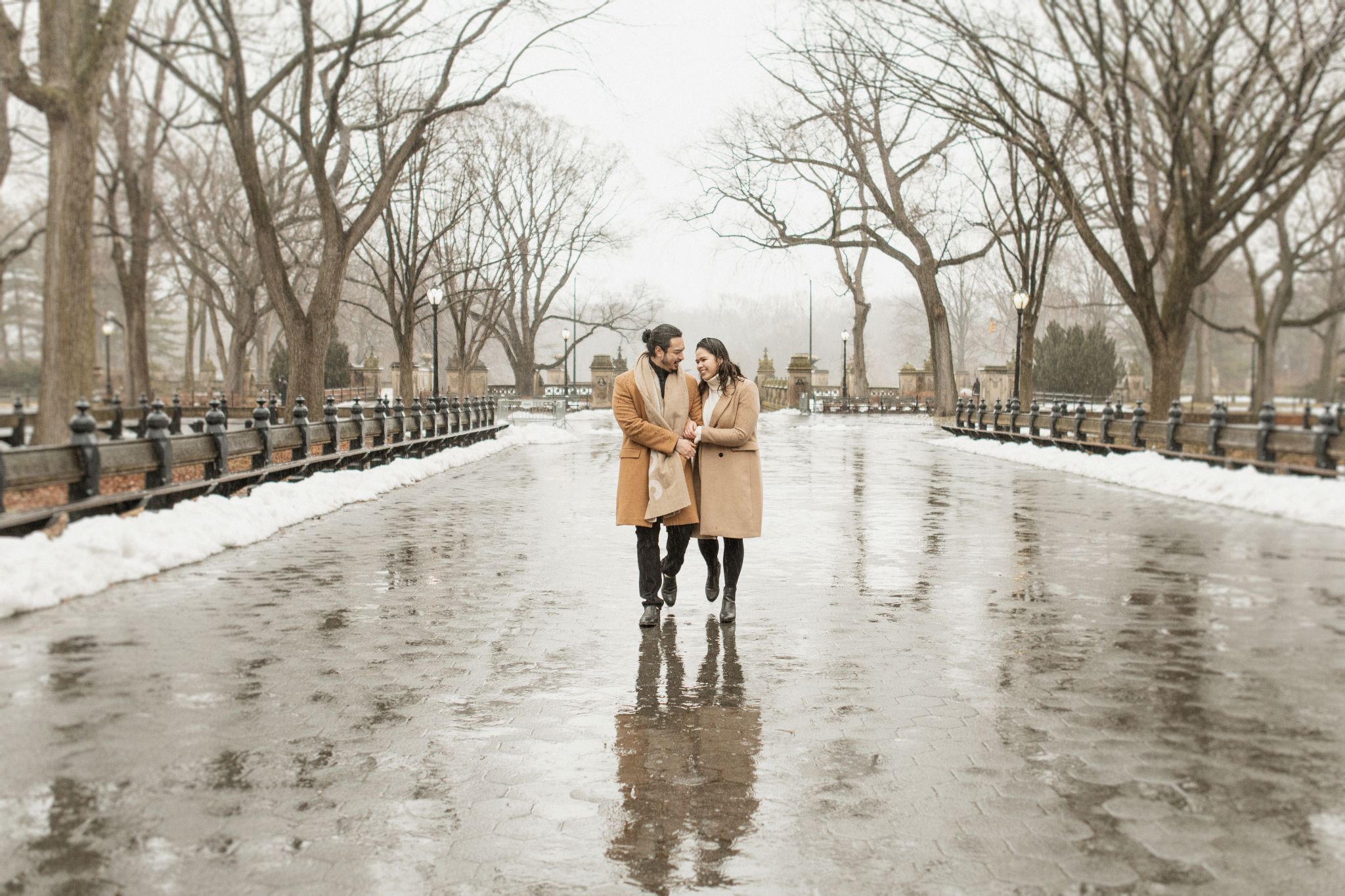 A Central Park Proposal by the Lake

It was a 8 AM when we next checked the time in Central Park New York City. Wet from the rain and, Zim, Maita and I stood on Central Park West with a few New York taxi cabs zipping by. The drizzle had turned into a light rain as the morning dawned on a sleepy NYC.  Zim had just finished asking for his now fiancée – Maita’s hand. The plan was to find a quiet spot- a very particular one by the lake. With the historic Eldorado at 300 Central Park West as a backdrop to the story – a quintessential fixture from last century of New York’s changing skyline.

If you enter Central Park on the west end on 72nd it leaves you in the middle of the Park and its main sights. The Bow Bridge a short ten minute walk and the Bethesda Fountain fifteen minutes. Cutting across the park is a 25 minute ordeal which would lead you from one side of New York City to the other (West-East)

In the spring and summer, the Great Lawn would be full of folks- but not today. Our morning had all the personality of a Gotham New York. Mist over the streetlights and scaffolds and rain coating the streets with a reflective sheen. Another taxi passed by, but no more afterwards. It was just past sunrise – that was the timing for Zim’s Central Park proposal. The plan was to meet on the bridge and to walk down towards the view the skyline from the the Lake.

Streetlights glistened inside Central Park. Benches empty- they were wet anyway. An occasional dog walker and dedicated runner. I waited on the Bow Bridge for Zim and Maita. Like clockwork they came down the path by the Lake and met me by the bridge. I wondered whether Maita suspected- it was the three of us in the morning. A casual sunrise stroll in the rain. It was romantic.

We strolled to the location by the Lake for the proposal and from a distance I watched the moments unfold. Seconds later, all finished with an official “yes” we decided on a brisk photo walk to Bethesda Fountain to calm the nerves. A quick stop at the Minton Tiles at the Bethesda Arcade and we ended our proposal at Central Park at the Mall.

In photos below, you can see the story.

The Bow Bridge – A well traveled cast-iron pedestrian walkway and attraction over the Lake in Central Park.

Bethesda Fountain –  Home to the Angel of the Waters statue, a circular fountain from the Civil War Era.

Bethesda Terrace – From the mid 1800s and once an outdoor restaurant the terrace is one of Central Park’s iconic plazas.

Minton Tiles – The Bethesda Terrace arcade is a brief but beautiful walk through a palette of artistic tiling restored in by the Central Park Conservancy.

The Mall – A hallway and pathway through the park whose first purpose was to provide a roadway for carriages. At the end of the Mall is the Literary Walk.

If you are looking for tips for a Central Park Proposal or would like to connect on your ideas for photography, contact me here.