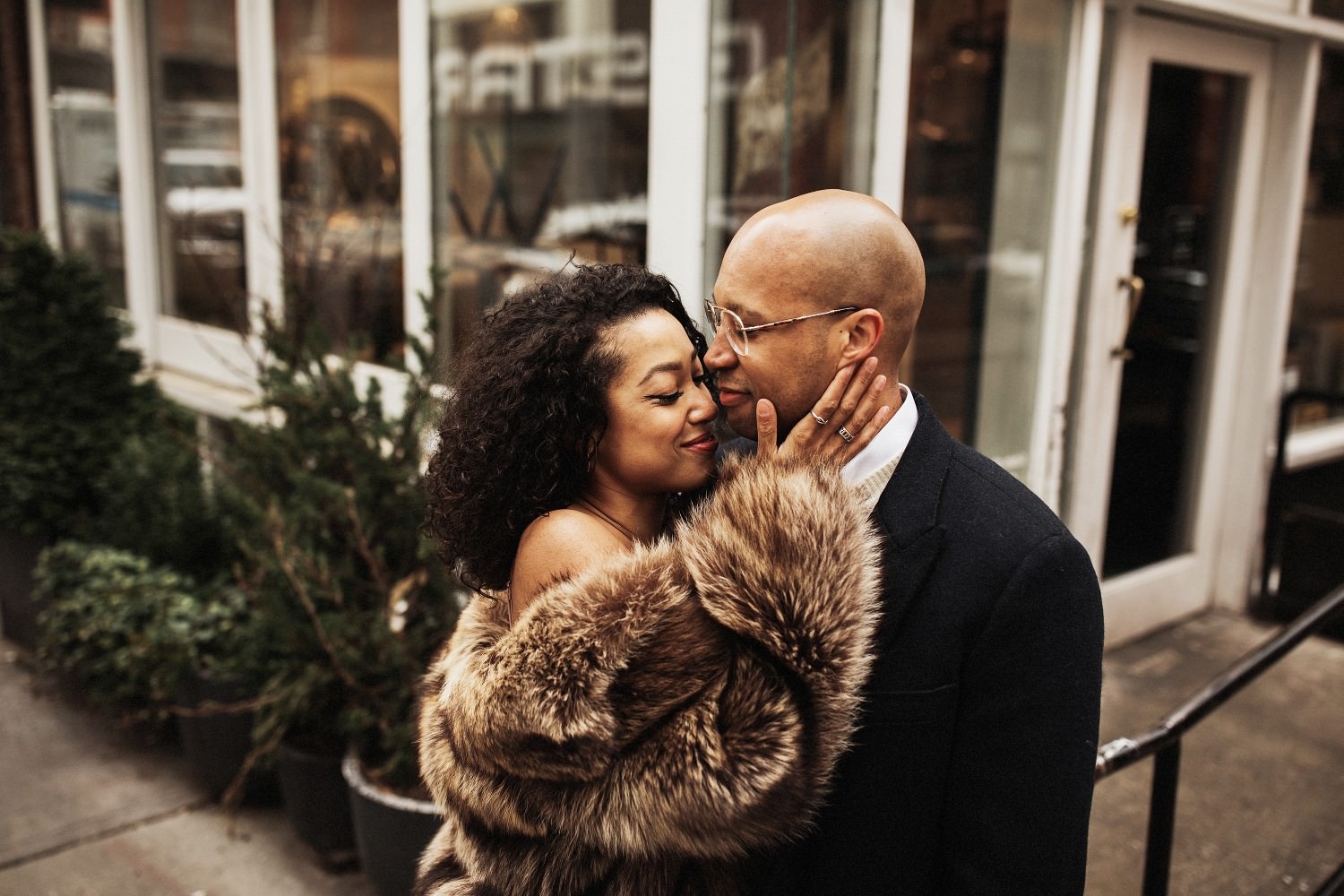 SoHo – short for South of Houston Street is one of NYC’s bustling neighborhoods. Nestled right within Lower Manhattan, SoHo is known for its high end stores and designer boutiques. Cut away from the main drag of Broadway and you’re drawn into its iconic architecture- painted facades, cast-iron and cobblestone streets reflect the light that cuts through the tapered rooftops. For Victoria and Chris’ SoHo NYC Engagement session we chose to meet at the Prince Street Subway station – a quick ride downtown from Times Square (take the R or W trains to get there). If you’re planning an Engagement Shoot in SoHo New York, prepare to truly experience New York from the ground up.

Moving around SoHo is incredibly easy if you know where to go and when to go. Photography here could be tricky and the time of day really matters if you want to get the best photos in SoHo, mostly due to the the way the light falls on the buildings. Start too late in the day and you’ll end up with harsh light – so just make sure you plan and time your session correctly. Somewhat obscure but pressing details for photography in SoHo – construction and scaffolding; rubbish collection; tourist pedestrian traffic. Locals would know that these play a huge role in the aesthetic of Downtown Manhattan.

Having done several shoots in SoHo helps a ton when planning out the schedule for the day.  The plan was to start the engagement shoot here within stone’s throw of Mercer Street and Greene Street where we could get the best photos that combine both the history and cosmopolitan energy of this New York City neighborhood.

Next, we would take a quick taxi ride to Chinatown’s Pell Street – one of my favorite locations because of it’s gritty character. This area of Chinatown is a favorite for photography because of its variety and color. Stay here until nighttime and you get a completely different vibe. Between smaller alleyways and the main drag of Canal Street, Chinatown’s allure is that of the everyday grit and frenzy that makes up part of New York City’s unique character. After spending a good amount of time here we would end at the Top of the Rock for sunset.

The Top of the Rock during golden hour is beautiful. With a little patience (and perhaps a lovely dress) you can create some beautiful moments with the New York skyline as your backdrop.

Planning a SoHo NYC Engagement session? Get in touch with me here.

Check out some of SoHo’s cast-iron history here.

Jose Melgarejo is a NYC Wedding Photographer based in Brooklyn and New York City. Specializing in weddings, pre weddings and engagements.